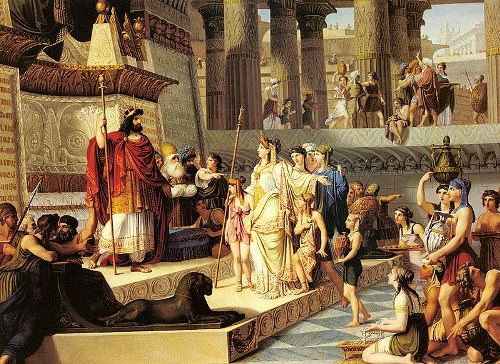 King Solomon, who was given the name Jedidiah at birth, which means Beloved of God, ruled the state of Israel for forty years. Most often, the years of his reign are called 972–932 BC, and this time is marked by relative calm and peace in Israel. No wonder the royal name of this ruler was Solomon (in Hebrew word “shlomo” means peace). He ascended the throne when he was barely twenty years old. But already in the first years of the reign, the young ruler proved to the Israelis his wisdom, organizational skills and strength. He immediately fortified Jerusalem, built a fleet, allocated large funds to promote trade with neighboring states, erected a great temple, and encouraged the development of science and literature.
Solomon was distinguished by his love for women. Some sources claim that he had about 700 wives and more than 300 concubines. The eldest wife of the king of Israel was an Egyptian woman.
Once, rumors of the wisdom and grandeur of the Jewish ruler came to the imperious and strong Queen of Sheba Bilqis, who ruled the country called Happy Arabia. Majestic temples were on its lands, the richest cities flourished, luxurious gardens were green and roads were built, and the people did not cease to glorify their wise queen. Balkida claimed that her country was the richest in the world, and she was the wisest ruler. The queen decided to see Solomon with her own eyes and to see his amazing mind and divine wisdom.
END_OF_DOCUMENT_TOKEN_TO_BE_REPLACED 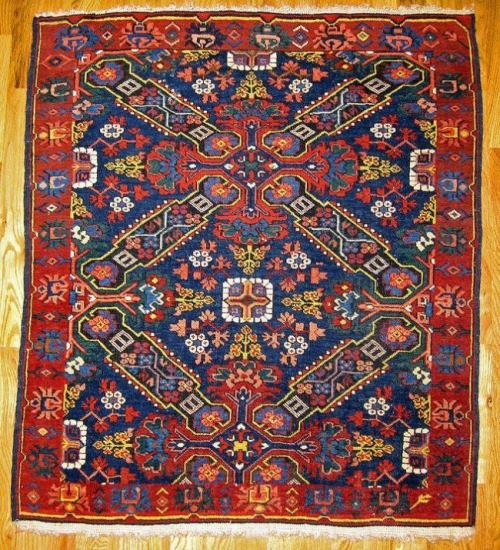 The carpet is, perhaps, the most ancient piece of interior. It has gone from a simple mat, through all sorts of complications of weaves and knots, to the very idea of weaving.
Carpet making as a part of weaving art has being developed since ancient times. The earliest of the remaining carpets, dating back to approximately V century BC, was found in one of the graves in the Altai. Tapestry weaving is even more ancient. A linen shroud woven with multicolored lotus flowers and scarabs was found in the tomb of the Egyptian pharaoh Thutmose IV, dating back to about 1400 BC.
The carpet was created not only as a practical thing, protecting from the cold, but also as a decoration, giving solemnity to the temples and palaces of the rulers.
As carpet-craftsmanship developed, magical, symbolic, well-known and hidden drawings, signs, letters appeared on carpets. Probably the most common patterns were tree of life, the fruit of a pomegranate or almond — a possible “apple” from the tree of knowledge, Phoenix rising from the ashes.
END_OF_DOCUMENT_TOKEN_TO_BE_REPLACED 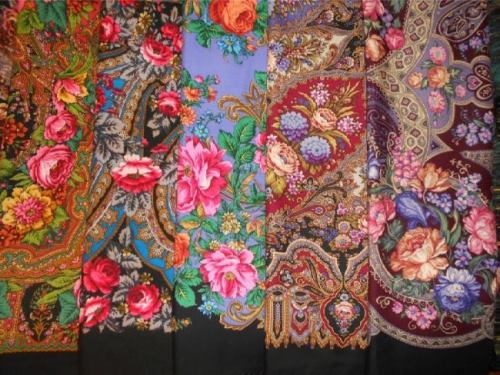 At first sight it seemed odd that there should be such an abundance of roses on Pavlovsky shawls. One would expect to find in this dour wooded region to the east of Moscow more ordinary and more modest blooms, the kind an artist might paint from life. Yet here the artist who designed the first Pavlovsky shawl lighted upon precisely this luxurious flower. That established the rose once and for all on the Pavlovsky shawl. But there is an explanation. It stems from the traditions of Russian folk art, with its predilection for images that are bright, festive and magical.
It is more than a century and a half ago since the first patterned shawls were woven in the little village of Melenki, near Moscow, marking the origin of the well-known Pavlovsky shawls and kerchiefs. In 1865 these shawls and kerchiefs won a silver medal at the All-Russia Exhibition of Russian Manufactured Goods. A century later, they were awarded the Grand Gold Medal and a first class diploma at an exhibition in Leipzig.
END_OF_DOCUMENT_TOKEN_TO_BE_REPLACED 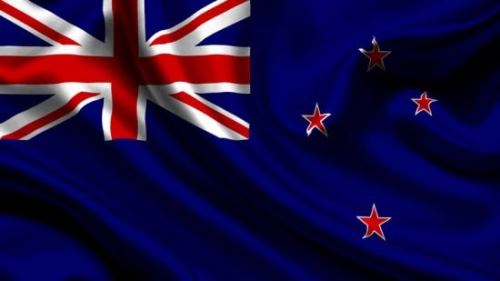 New Zealand is not only the country where Lord of the Rings was filmed, but also it is one of the most prosperous states in the world. Green hills, endless fields on which flocks of sheep graze, excellent ecology, clean rivers … Perhaps, these lands can be rightfully called one of the most beautiful on Earth.
New Zealand, the land of the long white cloud, is an island country in the South Pacific Ocean. It has two main islands, North and South Island, separated by Cook Strait. Both islands have mountains and hills. The Southern Alps are a long chain of mountains on South Island and they are often wrapped in clouds. The Maori are the first people to live in New Zealand. They came to there from the group of islands called Polynesia. Both English and Maori are national languages.
This country is known for Merino sheep, which are famous for their wool. New Zealand also produces excellent butter, cheese, and meat.
The long-beaked kiwi, a bird that cannot fly, is found only in New Zealand. You know, it is one of the country’s national symbols. By the way, New Zealanders themselves are sometimes even called Kiwis.
END_OF_DOCUMENT_TOKEN_TO_BE_REPLACED

The name argentum is derived from the Sanskrit word “argent”, which means “light”. Interestingly, in ancient Russia, the measure of the value of various items was bars of silver.
From silver they get the finest silver plates suitable for various kinds of artistic, medical and other purposes.
The main deposits of this precious metal are in Mexico, the United States (Colorado, Michigan), Peru, Canada, Australia (New South Wales), Bolivia and Russia.
Silver brings clarity of thought and calms the spirit. The white color of silver neutralizes any kind of negative energy.
From time immemorial this metal was associated with the Moon and water. Silver is well suited to those who suffer from depressive states and obsessive ideas. This metal helps to open up new thoughts and ideas, to accept the surrounding reality and adapt to it.
END_OF_DOCUMENT_TOKEN_TO_BE_REPLACED 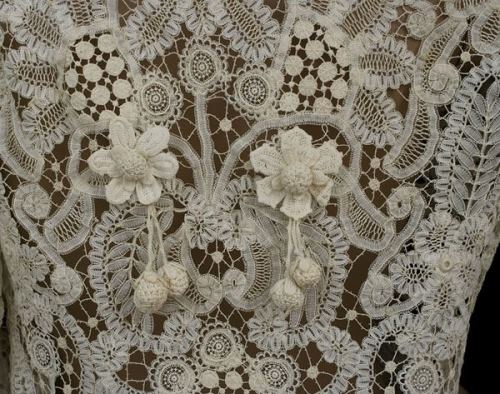 Lace is a beautiful and delicate textile. It is used to make clothing and to decorate household objects. The most delicate and artistic kinds of lace are made by hand with either needles or bobbins (spools). There are many different styles of lace and each has a different pattern of flowers, leaves, or other designs.
Handmade lace took a long time to make, and only skillful people could do it. For these reasons, lace was very expensive.
When and by whom the complex art of lace making was introduced to Russia will probably never be known—it has occupied a firm place among the handicrafts in this country from time immemorial.
Thirteenth-century chronicles record that Prince Daniil Romanovich impressed foreign ambassadors with his proud bearing and splendid garments. The princely attire, it appears, was trimmed with lace made from extremely fine silver and gold thread and embellished with a wide variety of spangles, feathers and pearls.
END_OF_DOCUMENT_TOKEN_TO_BE_REPLACED 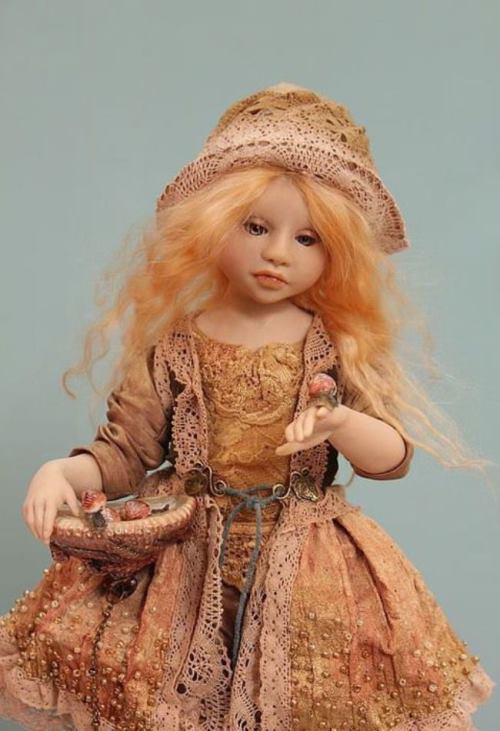 The doll is one of the most favorite children’s toys. Did you know that the history of this indispensable attribute of children’s games began more than 30 thousand years ago? And there are a lot of interesting facts in the “biography” of the doll.
The oldest doll made for children’s games is considered to be a toy made of mammoth bones. This doll’s legs and arms moved. The estimated age of the figure found in the Czech Republic is about 30-35 thousand years. Historians believe that such a difficult toy could hardly be the first.
The first dolls were not intended for games. Most often they were used in rituals. For example, in Egypt, the dolls were supposed to “accompany” the deceased in his afterlife travels. The Slavs made dolls as a talisman. According to legend, the doll presented at the wedding ceremony protected the family home of the newlyweds.
The Greeks forbade their children to play with dolls. Even in ancient Greece, wealthy citizens decorated their homes with dolls, made by skilled craftsmen. They sewed luxurious costumes and made kitchen utensils and interior items. The material from which the figures were made was very fragile, so parents very rarely allowed their children to play with such dolls.
END_OF_DOCUMENT_TOKEN_TO_BE_REPLACED
Страница 1 из 212»